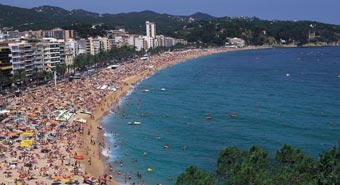 (*) COACHES AND MANAGERS:
1 fee free-of-charge (300 Euro in 3 stars hotel or 335 Euro in hotel 4 stars) for every 17 persons (including players, friends, relatives) paying the complete fare (the 18th person is free-of-charge).

PAYMENT CONDITIONS
The payment of the individual fee must be completed as indicated:
600 euro per every team before May 7th, 2023
Balance before June 4th, 2023

NOTES:
All participants need to register at the Palasport El Molì in Lloret de Mar before 11:00 on Monday; in case you should arrive later,  please contact the General Secretary for the necessary agreements or changes of your arrival
All Hotels are located in the center of Lloret de Mar and you can easily reach every gymnasium on foot, without any need of a bus.
The name of the hotel will be communicated not later than one week before the beginning of the tournament.
Upon request, we organize guided tours to Barcelona, to the Dalì Museum in Figueres, Andorra, Montserrat, boat cruises on the Mediterranean Sea along Costa Brava and reservations for the main amusement water-parks around Lloret de Mar.
We invite you to check low-costs flights from the main European cities to the airport of Gerona, located 30 km north of Lloret de mar, or to Barcelona, located 60 km. south of Lloret de mar.
Upon request, Organizers can rent a bus for your transfer from and to airports

Every team has the possibility to bring one referee to officiate the games.
The referee will lodge free-of-charge with the Organization

Every team traveling with its Referee,
will receive an EXTRA 50% DISCOUNT on one fee